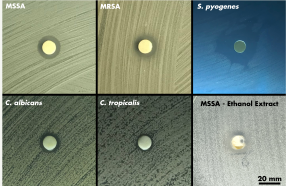 Objective: To elucidate antimicrobial and antifungal activities of “Nen dat” essential oil (NEO), focus on strains causing urinary tract infection based on the special usage of “Nen dat” in community.

Methods: “Nen dat” raw material was bought from supplier in Ha Tinh, Vietnam. Essential oil was extracted by water distillation following US Pharmacopeia 37 for 8 hours. Disc-diffusion method had been used to screen antimicrobial capacity of NEO. Minimum inhibitory concentration of NEO against bacteria and fungi was determined by agar dilution method. Time-kill kinetics study was conducted in order to demonstrate the antimicrobial and antifungal activity of NEO on representative strains. The time-kill assays were observed on Staphylococcus aureus ATCC 33591 (MRSA) and Candida albicans ATCC 10231 as the two representative strains.

Results: The average yield of NEO extraction was 0.4%. NEO was extracted at Hanoi University (NEO (HUP)) and at University of Medicine and Pharmacy at Hochiminh City (NEO (UMP)) were studied one after the other. Antimicrobial assay preliminarily shows that NEO has stronger effect on Gram positive bacteria than on Gram negative bacteria. The minimum inhibitory concentration on Gram positive bacteria and Candida strains are remarkable, varied from 0.08-0.156 μL/mL and 1.25 μL/mL, respectively for NEO (HUP), and 0.16-1.25 μL/mL and 5-10 μL/mL, respectively for NEO (UMP). Time-kill kinetics observations of NEO on MRSA and C. albicans indicate bactericidal effect of NEO on MRSA at MIC (0.313 μL/mL). This can be seen clearly at 6h after NEO treatment and continue during the following hours. Inhibitory phenomenon is also seen on C. albicans but in a less effective manner compared to that on MRSA.

Conclusion: This study brings data about antibacterial and antifungal activities of “Nen dat” essential oil, at the starting point of the study on Gram positive bacteria and Candida spp. Based on its special way of use in the community, “Nen dat” should be further investigated entirely and in combination with other antibiotics.